The tragic passing of American filmmaker Stuart Gordon in March of 2020 led me down the winding road that is his filmography. Rarely has a filmmaker sported a catalogue so varied in content and consistent in quality. From splatter comedies like Re-Animator to grimy drama Stuck, Gordon was a multifaceted and layered creator. When watching his final three films, one can’t help but notice a consistent thread between them. King of the Ants, Edmond and Stuck are all films soaked in grit and dripping in nihilism. All three explore the extent of human empathy and what happens when it is exhausted by a cruel world, portraying nightmarish scenarios with a stench of desperation.

King of the Ants was the first film to be produced by the mockbuster factory that is now The Asylum. It was a bold move for the company in its budding years, as other studios would not buy into the unfiltered violence of the story. A passion project long in the works from Gordon and actor George Wendt, King of the Ants is a revenge film where any style or cool it could have had is traded for a stark and harsh reality. Our protagonist Sean is recruited by a shady real estate agent to carry out a hit. When he is double crossed and survives a long (and I mean long) period of torture, Sean sets out on a path for revenge on his tormentors. What separates King of the Ants from similar revenge films like Oldboy and John Wick is an absence of overt style. The shot choices are formal and utilitarian, the grainy footage evoking a documentary feel at times. Catharsis is also on short supply as things start out bad and only get worse for Sean. He comes unprepared to carry out a hit that he is sent on, forcing him to improvise as he apprehends his target. This sounds like a setup for a cool action scene, a la the weapons museum early in John Wick: Chapter 3. But as I said, there is no fun to be had here. The killing is carried out slowly and brutally, with Sean hesitantly beating the man to death and quickly fleeing the scene.

The subsequent double cross is no easier to stomach. Shots go on for just a little too long as Sean is shot in the head, survives, and is tortured for days for information that he refuses to give up. After Sean survives and escapes, the path for vengeance is sadly much weaker than the rest of the film. As we watch Sean carefully and methodically take out henchmen, it doesn’t feel as justified because the film has been so down on him up until this point. King of the Ants is the weakest of this trilogy for that reason, as the final act is a betrayal of what had come before. It would be like if Funny Games had a happy ending. Nobody wants that.

Edmond is easily the hardest one of these films to talk about. Adapted from a play by the legendary David Mamet, Edmond follows the titular character as he searches for change in his life after a fortune teller warns him that he is not where he belongs. Notorious even in its days before adaptation for its difficult content, Edmond is not an easy play to find and not an easy film to watch. Edmond is a frustrated man riddled with prejudices that only feed into his anger as he is conned, pushed around, and ultimately out of his depth. His attempts to dive into the night life lead to him being beat over the head (metaphorically, unlike in our previous venture) by a side of society he doesn’t understand. A particularly troubling scene finds Edmond beating a pimp who tries to mug him, impassionately spouting racial slurs as he kicks the man while he is down. I won’t spoil the ending as it must be seen to be believed, but Edmond does present a very odd, anti-establishment take on the root of prejudice that is interesting to think about but doesn’t hold up to a whole lot of scrutiny. If anything, Edmond deserves to be seen for William H. Macy’s performance alone. 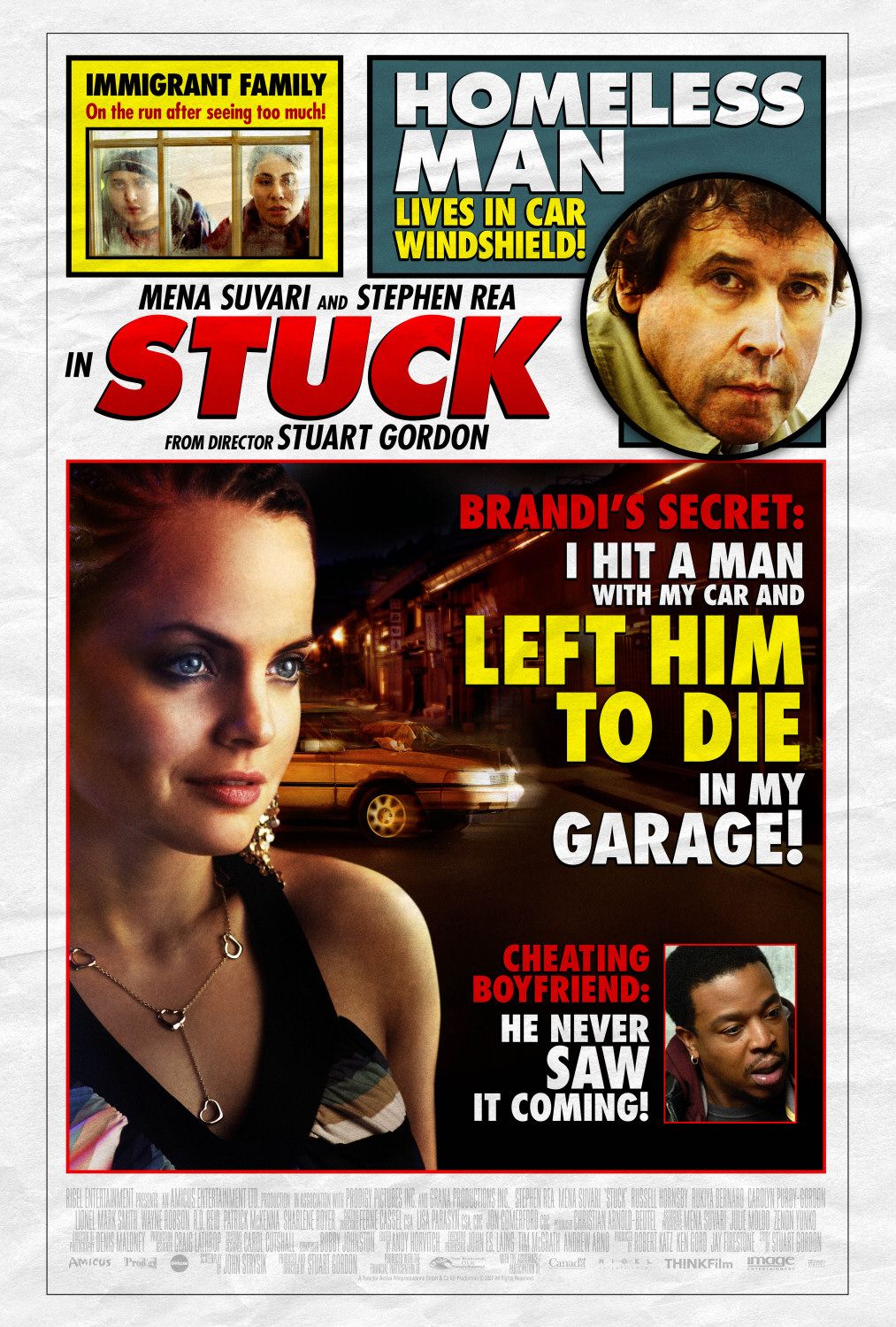 Stuart Gordon’s final film is the one that inspired this piece, and is the one I’m the most excited to talk about. Stuck follows a man named Tom that has hit rock bottom. When retirement home worker Brandi hits him with her car while high, getting him stuck in the windshield, Tom must escape while she tries to get rid of him to save her own skin. Out of all the final three films of Gordon’s, this one is the most desperate and scathing. Brandi is looking towards a promotion and is trying to stay out of trouble, struggling to provide for herself. She dismisses Tom and the situation that she has put him in for her own gain, but is it really her fault? It’s an indictment of an economic system that refuses to acknowledge an individual beyond their worth as a cog in the machine. Humanity is not part of the equation because the characters have never been allowed to make mistakes. Struggle begets struggle and violence begets violence, the worlds of both Brandi and Tom crumbling around them once they cross paths. Aside from all of the musings on class, Stuck is, like King of the Ants, a stomach turner. We watch in slow detail as Tom tries to escape and is thwarted either by happenstance or human intervention at every turn. In a pivotal scene, Tom tries to get the attention of a family of immigrants next door, only for them to fearfully turn the other cheek. They house similar fears to Brandi’s, afraid that police will investigate them if they were to call for help for Tom. Stuck is a seedy film about how we can become trapped in our places in life. Attempts to rise above are met with opposition from an uncaring and unjust world that always has room, but never enough.

When looking at Gordon’s entire filmography, his final three films stick out like a sore thumb. If anything, the existence of this final trilogy proves Gordon’s expertise in understanding the human condition, and how we are bred by the world we live in to be a certain way. They are films that deserve to be seen, known, and digested, despite their rough exterior. My journey into Gordon’s grimy world was ultimately extremely rewarding.