It isn’t often a film peaks ahead of the opening title, but A Mermaid in Paris‘s animated stop-motion opening is so charming it’s hard not to wish the rest of the film maintained that childlike wonder. It’s no surprise the bright animation is the best bit, as it’s helmed by Mathias Malzieu, whose animated debut Jack and the Cuckoo-Clock Heart was a surprising success with audiences. The figures in the opening credits dance across a miniature Paris that almost feels like a village again, and everything is so visibly whimsical, it’s sad to see the real world to come to tell this sappy, sweeping love tale.

Gaspard Snow (Nicolas Duvauchelle) is a nightclub singer in Paris who gets word that his family’s restaurant on the water may be sold. The Seine rises in a heavy rainfall, and almost as if it is a sign from above, a mermaid, played by Marilyn Lima, rises from the water in the height of Gaspard’s depressed state. She is stranded on the docks, and after a failed attempt to get her to the nearest hospital, Gaspard takes her home, and what she finds has her enamored with him. Her siren song, long perfected to work on any man, has no effect on him, and he is not instantly in love, remaining aloof to her charms.

He claims this is because his heart has exploded, and with all of the attempted camp, it’s surprising this isn’t literal. She tells him he will die like the others, but his immunity is in that he cannot love her, and her song cannot do its charms. This also means she can love him the way he wants her to, as her charms do nothing to his ways. It’s the melting of hearts on his end, and a first chance at love that is only possible now for her, and the two unlikely lovers set off on a spinning romance, like a less well written Shape of Water with fewer consequences, that brings both to understand themselves better. 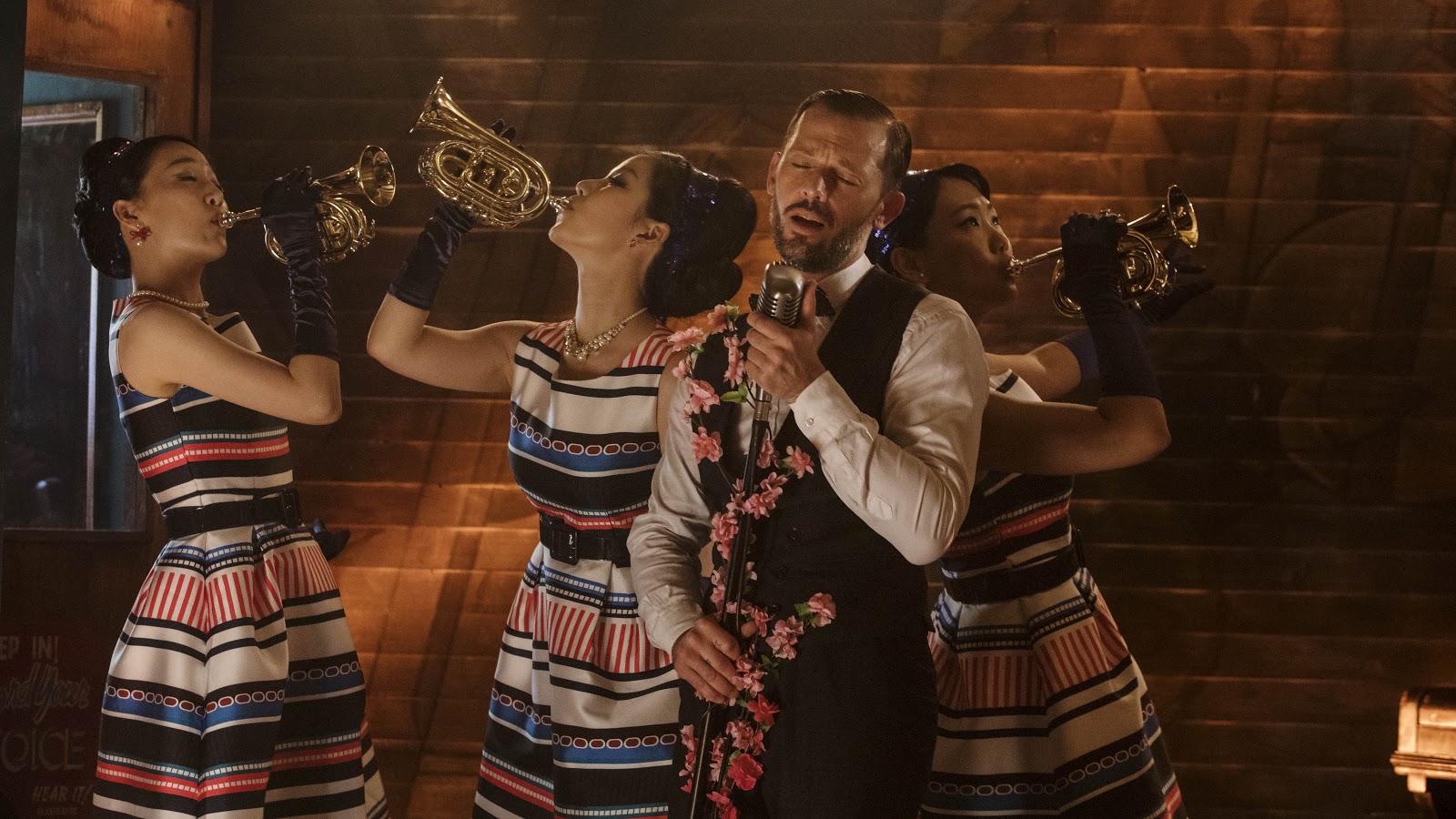 Honestly, it’s nearly a parody of a French film. It’s got the down on his luck hero crooning in a nightclub, the sweeping, over the top romance, the maximalism, and the obsession with Paris as the center of the world. It doesn’t always take itself too seriously, and may have some self awareness that it is a bit of self parody, but leaning into the absurdist fantasy of it all would significantly improve upon the film. The first act (and a brief appearance from Almodóvar regular Rossy de Palma) is delightful, trope-heavy but forgiving with its cheesy dialogue of longing about to burst. It is when these characters allow themselves to love that it goes wrong.

Apparently there is supposed to be a message here that dancing the night away can be an act of resistance, but there’s not enough meat on the bones of the film to make this sudden commentary realistic. Maybe with more weight, the idea that celebration and love in the streets can counteract the harsh rule of right wing reactionaries would be reasonable subtext, but there is none of this evil shown, nor do we see that scale of othering our lovers to the point where their love feels like an act of defiance.

This is a crowd pleaser through and through, and it’s hard not to imagine where it could have gone. The easiest influences to guess are likely the dark fables of Guillermo Del Toro, or a lighter Jean-Pierre Jeunet romp, but it mainly just feels like a more PG version of Agnieszka Smoczyńska’s dark mermaid musical The Lure. Malzieu seems more fit for children’s fare, an eye for whimsy that just grows grating when he tries to age it up. The fairytale for adults isn’t all bad, but it’s pitiful at times where it wants to be taken seriously, but is so incredibly schmaltzy it’s almost embarrassing to be seen viewing it. It’s a shame to see a film decline so steadily in quality, having gone from genuinely charming, to a lighthearted musical bar scene almost reminiscent of Ishtar in tone (hey, we love Ishtar in these parts), to some lovely cold hearted reluctant love, to an emptying balloon of a latter half, that kills the magic that was there before.