Whether it’s due to a unique plot twist or some controversial subject matter that deserves further exploration, the Spoiler Room provides a place for our authors, and you readers, to discuss a film’s details outside of our regular spoiler-free reviews. If you are coming into this having absolutely no idea what you watched, we recommend reading Shea Vassar’s explanation of that ending for Film School Rejects.

Charlie Kaufman’s I’m Thinking of Ending Things is a film that doesn’t quite come with a set answer. Its ending confirms little but that this is one man’s delusion, and that that man is the lonely janitor wandering the halls of a cold empty high school, creating a lover for a younger, more desirable self out of women seen at a distance. It seems as if time is shifting, the janitor’s parents, or Jake’s (Jesse Plemons), his younger self, changing age in the imagined story, as he cannot decide when in life this is. This is a story being written as it goes, one whose narrative isn’t even outlined outside the ending dance through the halls of an all-too-familiar high school, and Jake’s self hatred pushes through when even his imagined girlfriend (Jessie Buckley) wants to end things, just not the same way he does.

The big question is: why her? The young woman is just another girl in a bar at trivia night, not interested in this man hanging around begging for conversation. She is unattainable, here with her girlfriend, yet the lack of a man by her side makes her appear available to Jake, who is so desperate. Jake wants to wrap this daydream around someone impossible for any man, so that rejection is less personal, but even he is aware of how his leering presence may be remembered, though we don’t know if he enjoys this discomfort. With a female partner and a resignation against being expected to have a man around for protection, this particular woman comes off as exclusively homosexual, thus a greater challenge, and an impersonal failure in his personal life, so this is what he imagines for himself, and defines that it isn’t real for him.

Whether her character is defined by traits all belonging to one person or of many, we know this much is true: she was at a bar celebrating an anniversary with her girlfriend when Jake came over, and the confrontation left her unsettled. It’s less clear when she vaguely mentions a girlfriend on the car ride, but here it is certain that she loves a woman, and does not wish to be bothered by men. She’s resentful that only a man at her hip could deter the man she calls a creep beside her, and she remarks that Jake wouldn’t have made a move if she had been there with her boyfriend instead of her girlfriend. Earlier in the trip, she remarks about a girlfriend in a vaguer context, where it is not quite clear whether she merely refers to a friend. Girls are enamored with her, an ice cream shop worker pushed to the side by her pretty, straight-laced coworkers tells her that she has such a warmth for someone who would normally have a sharpness to her. The two discuss sexuality once, in the context of mental health, and she accidentally creates a parallel with personality disorders and homosexuality being said to have been caused by our mothers, and Jake corrects her, and she seems almost shocked her wording could be viewed that way.

What we do know about her comes in moments of vulnerability, whether they come from the woman in the bar, or other women Jake has watched with a studying eye. She is angry that the absence of men in her life leaves her vulnerable, and, this may be pulled from another woman, she is angry with her own ability to say no. Speaking of a professor who wanted more from her, she recalls having struggled to say no when he makes moves, and she regrets this silence of hers, and is clear it has marked her. She hates the idea of a perfect woman in fiction, and when asked to describe her boyfriend, Jake, just before the illusion falls down, she can’t, as the janitor doesn’t know himself well enough to create a sympathetic younger character of himself, while she is a combination of everything else, centered around this impossible woman in a bar, but at least is able to act as an outlet for his observance of the misogyny he enforces. 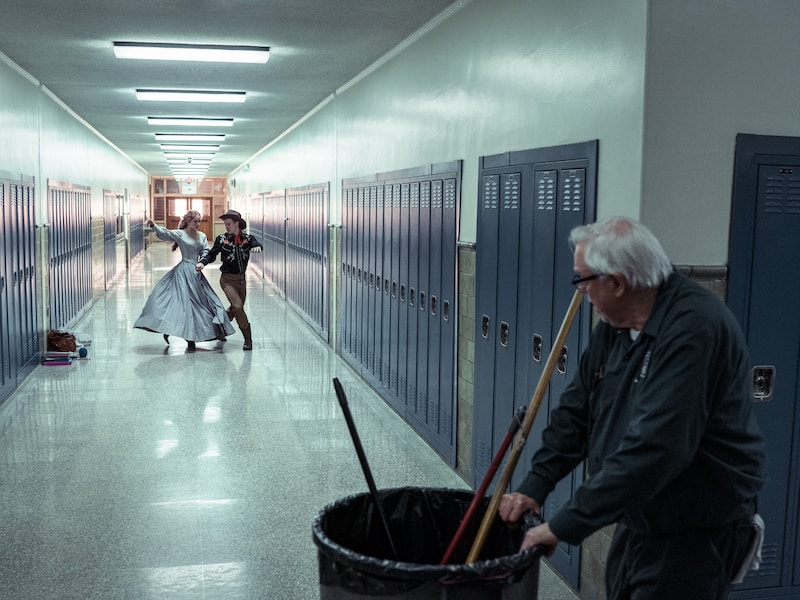 Though Jake is applauded on a stage in his final moments, though only in a delusion, yet the whole film is a delusion, so it is applause much the same, this is only self-congratulatory as wishful thinking for him. Reading the film as misogynist seems a bit unfair, as though our heroine is a product of a man’s mind, she is not rendered perfect by it, and her greatest desire is to leave him. He is aware of the misogyny he elicits, as well as what is faced by the many real women he has merged to create her, and while that may weigh on his conscience, it does not change his illusion. He kills himself in the end, much clearer in the book, and affects just as few people in death, leaving so little impact on the world that his misogynistic daydream isn’t rewarded.

It is said that you cannot write poetry on a napkin, and, at least in the book, Jake can’t even bear to write his phone number there. This line is in reference to poet Eva H.D’s defiance of this rule, whose collection Rotten Perfect Mouth the young woman recites a poem from as if it is her own. She speaks of a “wife-shaped loneliness,” perhaps the best description of what her illusion to Jake is. She is a compilation artistically in this way, reading Pauline Kael’s review of A Woman Under the Influence as if it is her own (Eva H.D. ‘s book, and a collection of Kael’s writing, are seen on Jake’s childhood bookshelf). Kael says that the Cassavetes film is too emotionally maximalist, to the point that Gena Rowlands performance as Mabel Longhetti is too charged at all times to leave room for subtleties, and no moment can be pulled out as stronger. She refers to it as pitying, the scene where Mabel slashes her wrists, and her husband puts a Band-Aid over it is trite, painfully obvious idiot symbolism to her in a film about a symbolic perpetual victim.

Is the young woman the one under the influence, or could it be said that Jake is too. Those reading it as a misogynist view within his male ego are the ones making him out to be Kael’s symbolic victim, but this is a film about two imaginary people, one pulled close to home as the younger version of his creator, and the other a collage of many more. This is the beginning of Kaufman becoming aware of his own pretentiousness, as Kael’s review can be said to be a critique of the majority of the film, the part that exists as a constantly rewritten story in the man’s head. Jake’s rewrites of his own fantasy are self-indulgent, painting himself as a perfect victim of mental health and societal rejection, and giving his fictitious partner so much going on in her life that few details can stand on their own as her. It is said that the worst way to end a film is that it is all a dream, and what the janitor invents here is exactly that, but the wallowing self-pity makes it clear how Kaufman knows his base storyline is not the point here.